OFFBEAT LOCATIONS TOGETHER WITH DUCATO

Climb aboard your Ducato-based motorhome and explore offbeat destinations including Appenzell Ausserrhoden, Hallstatt and Postojna Cave!

Travelling in a motorhome allows you to reach rarely visited places that are difficult to access without your own transport. Here a motorhome becomes not only a means of getting around, but also a basecamp right in the heart of the place, which brings you into close contact with the surrounding environment. What could be more exciting than that?

If you want to experience this feeling, we suggest you go and discover one of the following three offbeat destinations!

Ring in the New Year, then do it all over again two weeks later! This year, treat yourself to a double New Year's Eve aboard your Ducato-based motorhome by visiting Appenzell Ausserrhoden, one of the smallest cantons in Switzerland, which is located in the northeast of the country. Here, New Year’s Eve is celebrated twice: on 31 December, following the Gregorian calendar, and on 13 January, the last day of the Julian calendar. On these two dates, the streets of the canton are filled with groups of Silvesterchläuse (New Year's Mummers), who wear outlandish masks and headdresses and go from house to house and farm to farm, giving new year’s greetings to residents through dance and song, with the help of the cowbells they wear around their necks. There are three types of Silvesterchläuse mummers: the Beautiful Ones (Schöne), who wear refined and traditional velvet clothes and magnificent headdresses depicting scenes of rural life; the Ugly Ones (Wüeschte), dressed in costumes made of dry branches, foliage or straw and donning papier-mâché masks with demonic features; and finally the Beautiful-Ugly Ones (Schö-Wüeschte) representing the forest or nature, who wear finely crafted costumes made of natural materials. Here you get to celebrate New Year twice, what’s not to like? 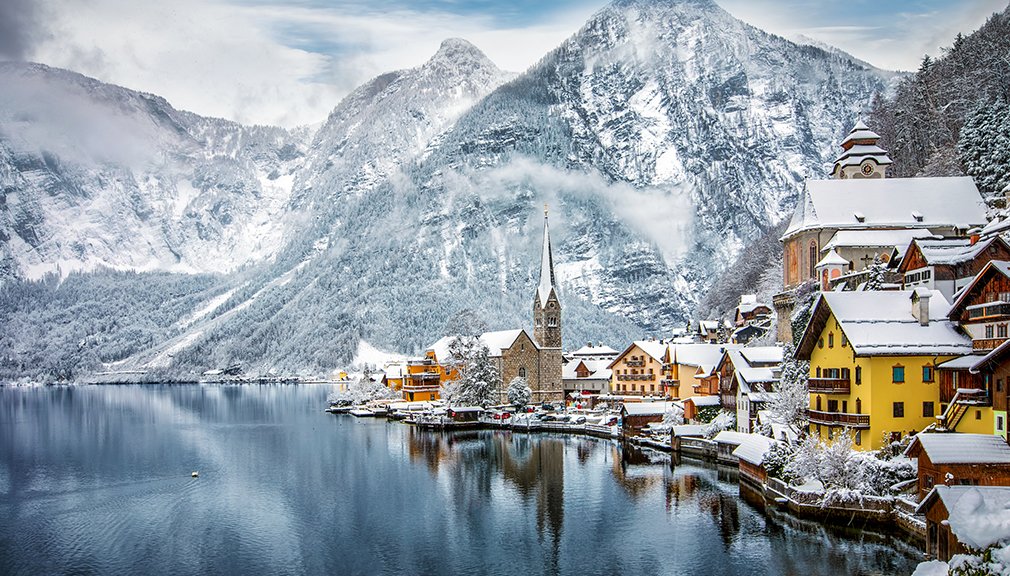 Located in the Salzkammergut region, Hallstatt is considered one of the prettiest villages in Europe, especially in winter, when it transforms into a fairy-tale setting surrounded by shimmering snow-caped Alps and with the lake reflecting the glow of Christmas lights. Once you reach Hallstatt in your Ducato-based motorhome, the first thing you should do is to venture out and lose yourself in its narrow backstreets. The village is small enough that you can easily get around it on foot. Ten minutes away from the central Markplatz, walking past 16th-century, alpine-style houses, cafés and olde-worlde shops, you will come to the village’s most famous photo spot, in the Römisches district. We also recommend visiting the small 19th-century church and the nearby Bone House (ossuary) in Saint Michael’s Chapel, which houses more than 1200 skulls.

From Hallstatt it’s just a short hop to Salzwelten (World of Salt), where you will find a diverse set of attractions including a 7000-year-old salt mine and the Skywalk, a viewing platform that offers a spectacular vista of the town.

Fun fact: the village of Hallstatt is particularly popular with Chinese tourists, who flock to this corner of Austria every year in huge numbers. So beloved is this small village in China, that a replica has been built in the southern province of Guangdong, on the outskirts of the city of Luoyang!

Are you ready to experience an authentic Austrian Christmas?

If you love excursions to scenic lakes, we suggest you read our article on the most beautiful parks in Europe.

Lofty mountains, rivers, streams and vast rocky spaces: this is not an enchanted valley, but the spectacular setting of Postojna Cave, a beautiful and captivating cave system located in Slovenia. So extensive is this underground paradise that you can ride a train through it, a modernised version of the world’s first cave railway which was built here in 1872. By visiting this World Heritage Site you not only have the opportunity to admire the Brilliant, a 5-meter-high stalagmite that gets its shimmer from the thin layer of calcite deposited by water droplets, but also catch a glimpse of what look like baby dragons! Long ago it was rumoured that, following heavy rain or floods, strange fish-like creatures with pale skin, a serpentine body, a long tail and four legs would emerge from the caves. Locals believed that a dragon lived in the depths of Postojna Cave and that the strange fish were its offspring. The theory was eventually dispelled by scientific studies that nevertheless identified the creatures as a new species, the olm, and you can still spot some rare specimens to this day. If you are visiting these places during the Christmas period, don’t miss the sensational Living Nativity Scenes set along the cave route: each 90-minute performance is an unforgettable experience!

Which of these three magnificent places will be your next destination on board your Ducato-based motorhome? Whichever one you choose, have a wonderful trip!