NEXT STOP: NORMANDY! AN EXTRAORDINARY ROAD TRIP TO THE ALABASTER COAST IN YOUR DUCATO.

Framed by a jagged coastline that alternates between white chalk cliffs and golden beaches, the region’s eventful past and emblematic figures have shaped the character of some of its best known historic towns and villages. Which place are we talking about? It is calm, peaceful and eclectic: it is amazing Normandy.

Located in the north of France, overlooking the English Channel, this region has been the birthplace and home of unforgettable characters from Joan of Arc to Richard the Lionheart, as well as the scene of momentous historical events such as D-Day during the Second World War.

Are you ready to visit one of the most special destinations in France aboard your Fiat Ducato-based motorhome?
Let’s go then! 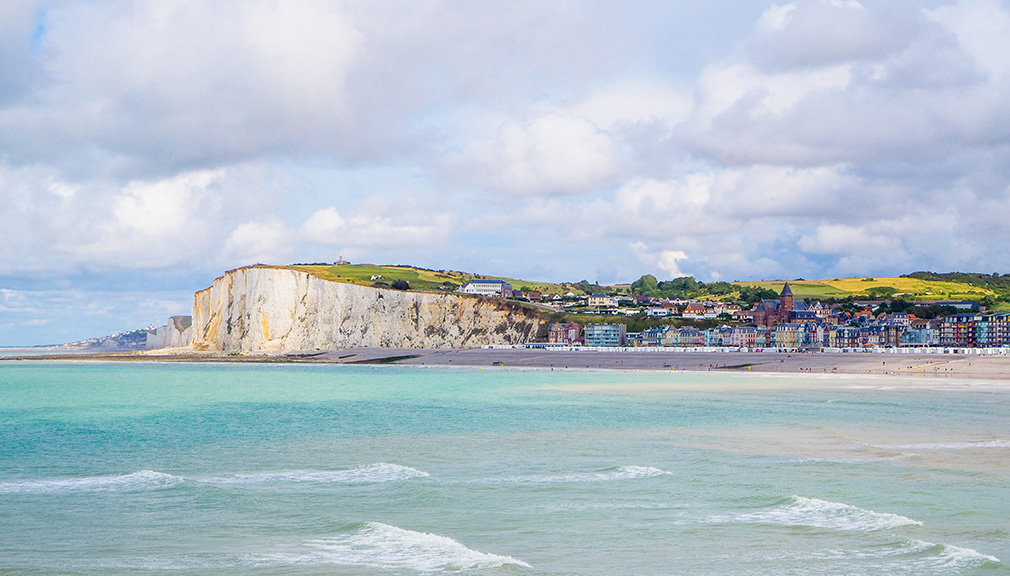 We start our journey from the eastern end of the Alabaster Coast: Le Tréport. Famed for its rocky coast with high cliffs overlooking the sea, the most unmissable attraction of Le Tréport is its funicular railway, which leads right into the town. If you catch the train from the clifftop, you can enjoy a spectacular rooftop panorama as you descend over the rocks. Unmissable!

If you adore seaview landscapes, we recommend that you also read about our tour dedicated to "Discovering Ireland". 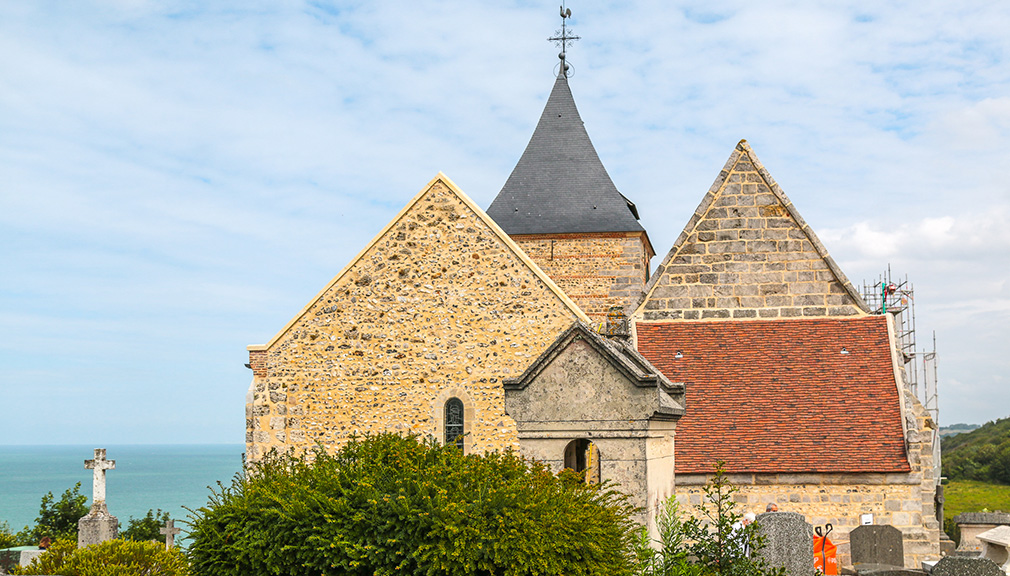 The village of Varengeville-sur-Mer, located just south of Dieppe, is one of the most intriguing places on the Alabaster Coast. In addition to the beautiful gardens that surround almost all the houses in the village, the small church of Saint-Valéry is well worth checking out. This small church, which is perched on the cliff edge, houses a stained glass window made by Georges Braque, who lived in the village and is buried there.

Before arriving at Yport, if you have some extra time available, we suggest you detour inland for a stopover in Rouen, the medieval city where Joan of Arc was tried and burned at the stake, and which boasts a rich artistic heritage. If you are lucky, you can also enjoy the magnificent evening show at the Cathedral: sounds and lights are projected onto the façade, merging with the building’s architecture. Magnificent!

We then continue our journey onward to Yport, located 6 km from the fishing port of Fécamp, a town of art and history. You really must make a rest stop with your Ducato-based motorhome in this small town, which has fascinated iconic figures such as Dieterle, Maupassant, Gide, Laurens and Boudin and which in the 19th century also became a renowned summer destination for its peculiar seafront architecture, which is similar to the Art Nouveau style. 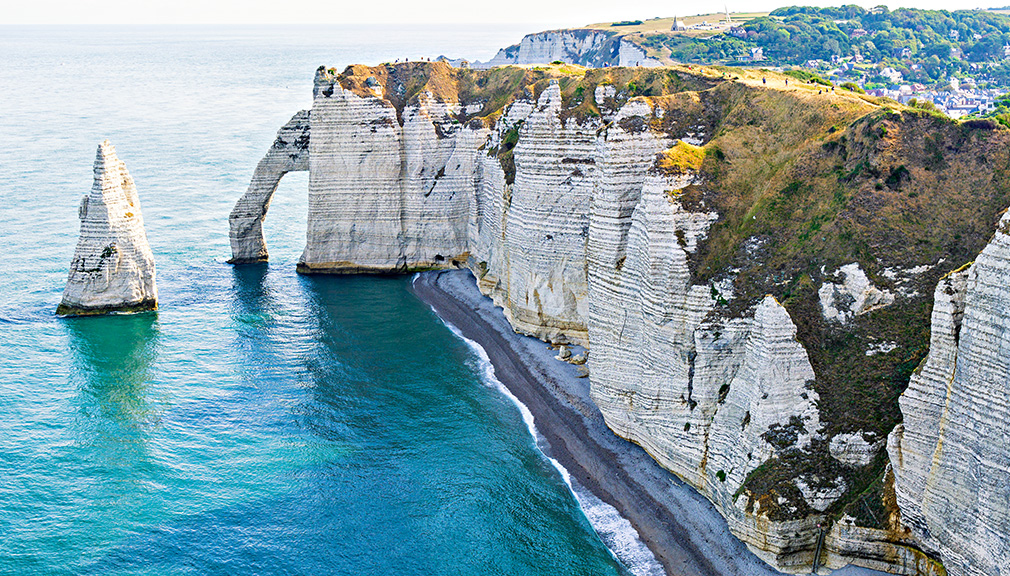 After arriving in Étretat, we recommend you leave your Fiat Ducato-based motorhome in the train station car park, to avoid the risk of running into urban traffic and thus losing precious time.

Also a fishing village, Étretat is renowned for its geographical location, ensconced between the Falaise d'Aval and the Falaise d'Amont, the two most famous cliffs on the Alabaster Coast.

Book yourself onto one of the many guided tours across the white chalk cliffs, which date from the Turonian age. Keep an eye out for La Manneporte, a gigantic natural rock arch that plunges steeply into the sea, as well as the staircase to the top of the Falaise d'Amont and finally Étretat Gardens, which overlook the Falaise d'Aval.

Fun fact: if this landscape seems familiar to you, that's probably because you have seen it in various impressionist paintings. Several painters, including Claude Monet and Gustave Courbet, played their part in helping to capture this spectacular coastline on canvas for posterity. 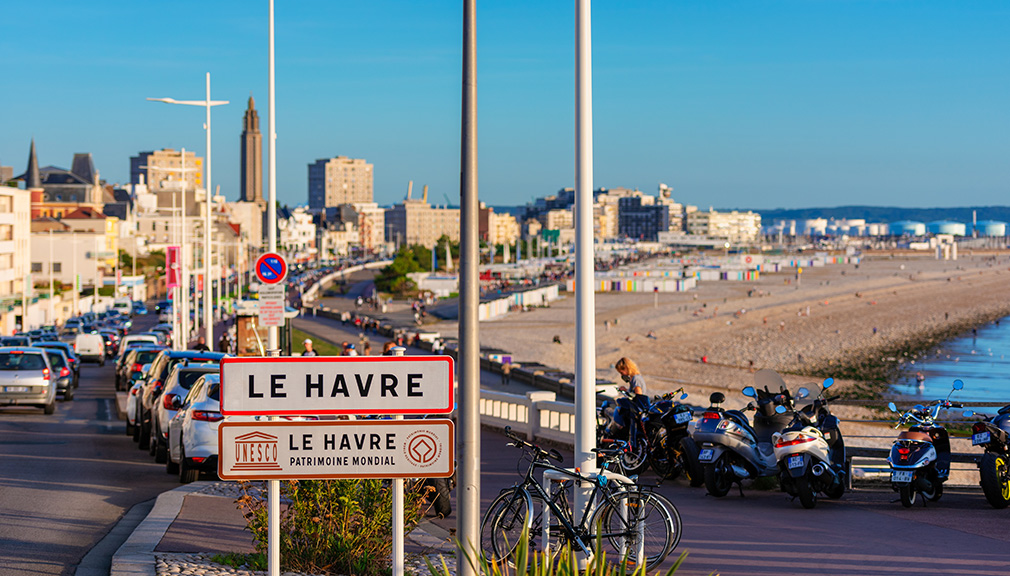 With its 193,000 inhabitants, Le Havre is the most populous city in Upper Normandy. In 2005, its historic centre, which was rebuilt after the Second World War thanks to the intervention of Auguste Perret, became a UNESCO World Heritage Site.

Make sure to visit MuMa, the André Malraux Modern Art Museum, which houses works by the greatest Impressionist painters, namely Boudin, Monet, Pissarro, Degas, Derain, Renoir, Sisley and Marquet. Did you know? It was here in Le Havre, in 1872, that Claude Monet painted his “Impression, Sunrise”.

If you are a plant lover, we recommend a visit to Fort de Tourneville, a former military fortress which, in addition to offering a beautiful view over the bay of the Seine estuary, boasts several gardens and greenhouses with rare plants. 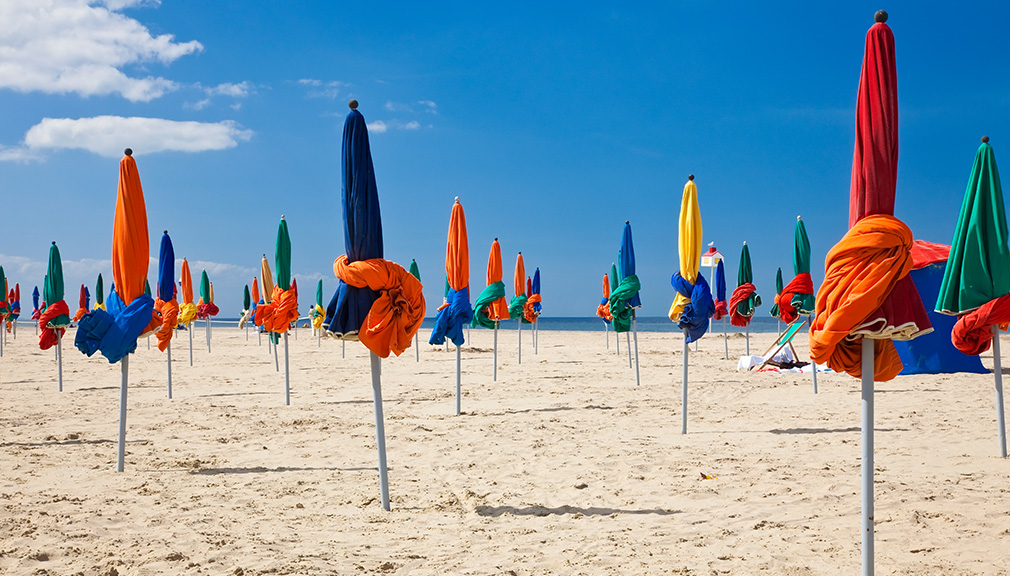 For a chic and colourful bathing experience, we recommend a quick stopover in Deauville. Not only are its beaches known as the most colourful beaches in France, due to the parasols rented out by bathing establishments, but they are also frequented by the biggest French celebrities. 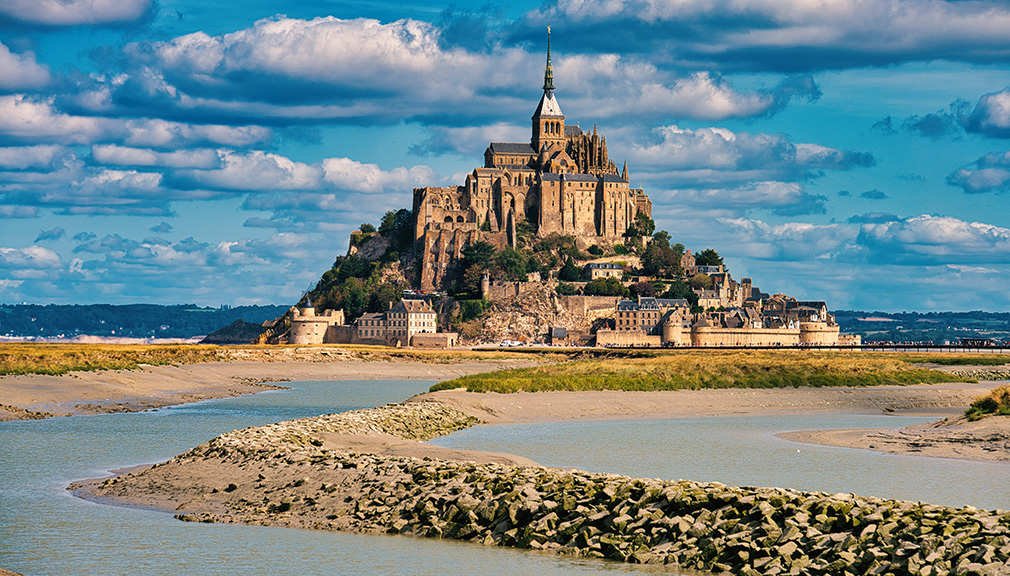 Our tour of the Alabaster Coast wouldn’t be complete without visiting the famous abbey of Mont Saint-Michel.

Leave your Ducato-based motorhome at the Camping du Mont Saint-Michel car park and walk the rest of the way on foot. That way you will have the opportunity, at low tide, to cross the narrow causeway over shifting sands that connects Mont-Saint-Michel to the mainland. After visiting the abbey, a nice way to enjoy the view is to walk along the ramparts that surround the island.
We have reached the end of this fantastic tour. So, why not brush up on your French, load up your Fiat Ducato-based motorhome and set off to discover the eclectic delights of Normandy?

Until the next adventure!