HOLIDAY WISHLIST: AN ON-THE-ROAD ADVENTURE IN SEARCH OF GALICIA!

“Ultreia! Et suseia!”. For centuries, Christian pilgrims from all over the world have walked the roads of Galicia to Santiago De Compostela, greeting and supporting each other, wishing each other a good journey, but also blessing each other with hope for a better future.
This is the spirit of these rugged lands, which among endless hills and timeless cities has welcomed people from all nations on a journey that may be one of the deepest experiences of their lives.
So let's discover Galicia together, on a short journey which we hope will conquer every one of us!

The first unmissable stop in this region is undoubtedly the Ézaro Waterfall, at 640 meters above sea level in the province of La Coruña. Here we can see a natural wonder unique in Europe, where the waters of the Rìo Jallas flow directly into the ocean from a 40-metre waterfall.
Although uniquely spectacular, not many tourists visit this place, preferring to flock to famous cities and sights. This will allow us to visit both the waterfall and the magnificent surrounding areas, exploring its natural wonders in complete tranquillity. A perfect area for those who prefer to experience the adventure of exploring the natural wonders of Spain in their Fiat Ducato-based campervan!
The province of La Coruña also offers us a visit to the Corrubedo Dunes, inside the natural park named after them. Here too we will find a place capable of making us fall in love under the spell of peace, far away from the chaos of everyday life, discovering the breathtaking expanse of dunes joining the land with the ocean alongside an area of roughly 6 square kilometres. An experience out of this world, and a landscape very different from those where we normally see this kind of natural spectacle. 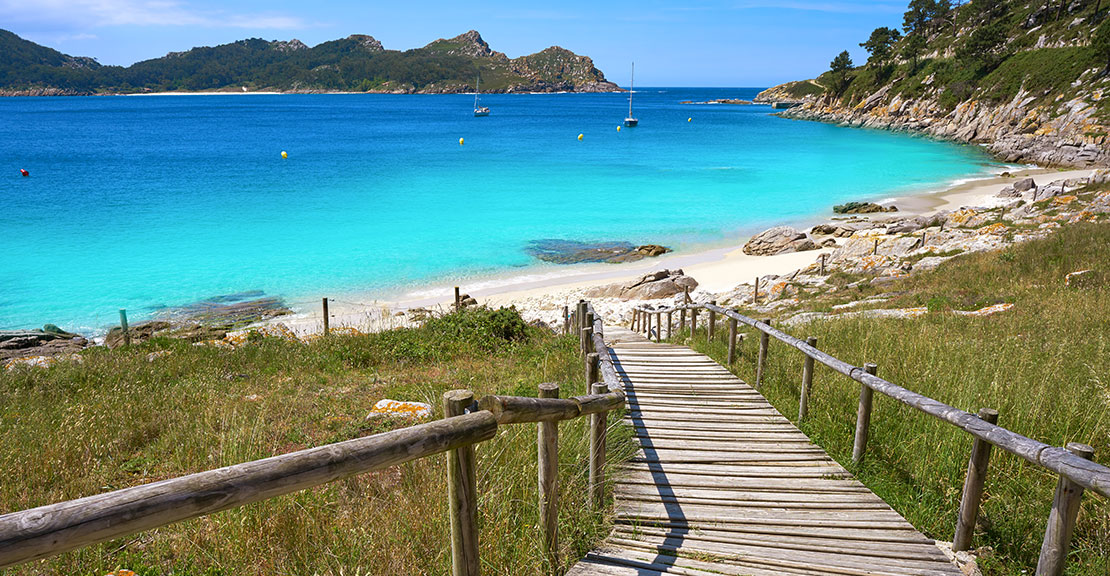 Still in the western part of the region, we find the Cíes Islands. This is a complex of three islands linked by strips of sand that on one side are touched by the ocean and on the other create the Lago de los Niños. An almost dreamlike scene for its beauty and rarity, offering some of the most beautiful beaches in Spain, and indeed in the world.
These islands are not currently inhabited (for years they provided refuge for the pirates who sailed these waters between the North Sea and the Atlantic ocean). They are part of the Atlantic Islands National Park.
For obvious reasons of space, only a limited number of tourists are allowed to visit the islands every day, so you’d be wise to make a reservation, to avoid unpleasant surprises! After a pleasant day of sun, sea and long walks on the typical white sand, it's time to get on board our campervan on a Fiat Ducato base... and head north towards La Coruña. 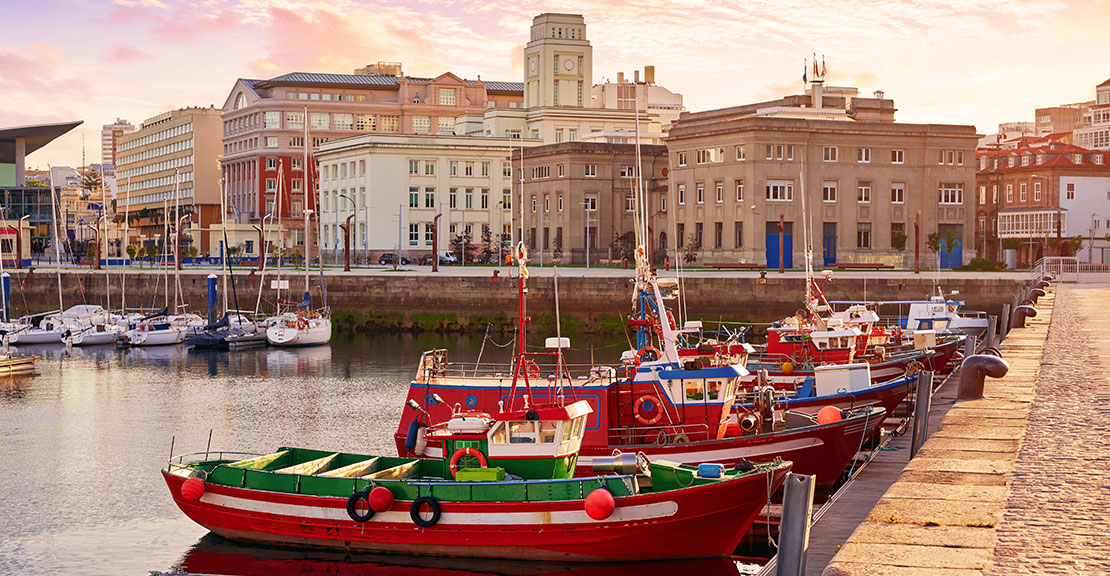 Capital of Galicia between the 16th and 19th centuries, La Coruña remains one of the largest and most populated cities in Galizia. The main port in the area, the city also offers visitors fascinating attractions such as the Tower of Hercules, the oldest still operating lighthouse in the world, and the surrounding district featuring a network of paths and a sculpture park... an open-air museum where we can admire original works by Galician sculptors.
It also contains Picasso's childhood home, the science and technology museum and the Cantones district... the trendy part of the city, full of shops, palaces with ornate windows and impressive 19th century buildings.
Gourmets can revel in rich culinary tradition... naturally starring the freshest of fish!
However, it’s time to head for Santiago De Compostela, the city of the soul: the last destination in our voyage to discover Galicia. 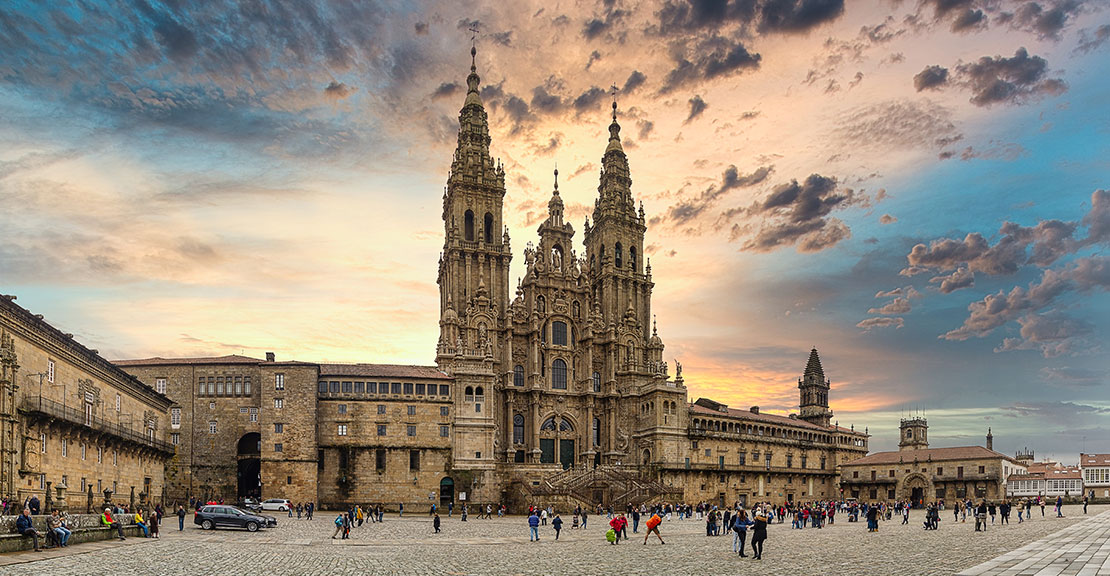 Inland, roughly 90 km south-west of La Coruña, stands Santiago, the regional capital and the destination of hundreds of thousands of tourists and pilgrims every year.
That's where we soon finally arrive, in our faithful mobile home on its Fiat Ducato base.
Santiago de Compostela is a magnificent city: in the streets, people are always ready to find an excuse to smile at you or make a kind gesture. The ancient buildings blend with modernity, and the centuries-old customs linked to the Pilgrims Way are intertwined with contemporary festivals and events... making the city an explosion of warmth and life which is sure to be in harmony with the spirit of every campervan owner!
Exploring the streets of Santiago in any direction we soon find ourselves facing the great Cathedral. Its Gothic, Baroque and Romanesque architecture merge superbly after all its restorations down the years, towering over the huge square it overlooks... crowded with visitors and pilgrims from all over the world, many having walked for more than 900 kilometres, to stand where they are standing now, tired but proud, each having lived their own personal Road.
Campervan people are sure to appreciate the vitality of this city… after leaving, our long voyage will glow in our memories... of the countless unforgettable roads of Galicia!