GETTING AROUND BY CAMPER

A motorhome tour to a charming land nestled between the Latin and Germanic hearts of Europe.

A short itinerary takes us through Wallonia, from Liège to Durbuy and onwards as far as Dinant and Bouillon. The region is characterised by its placid, gently rolling landscape dotted with castles, gardens, impressive watercourses and, last but not least, refined culinary traditions. 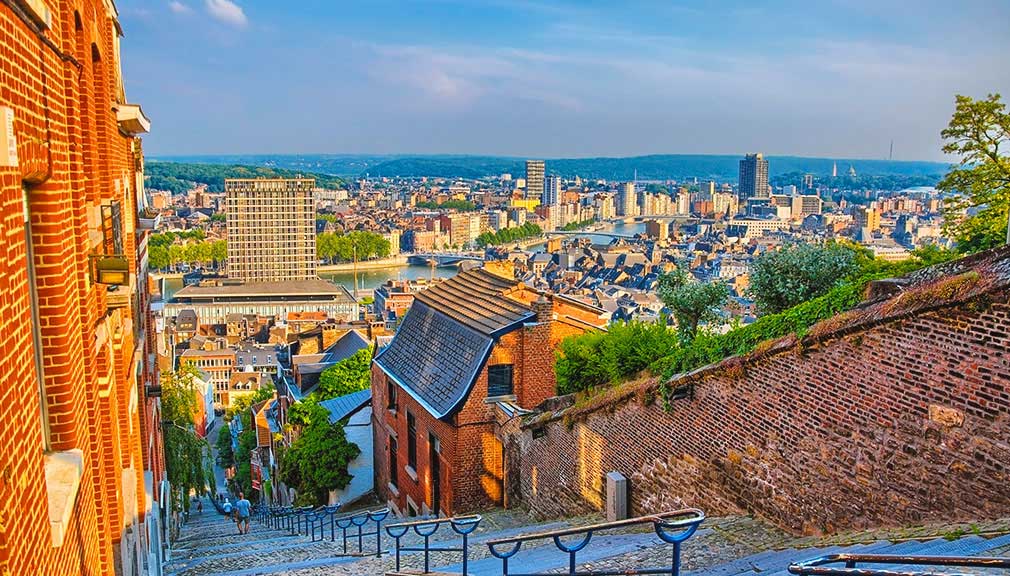 Known as the Burning City, Liège is the largest metropolitan area in Wallonia and the third-largest in Belgium, after Brussels and Antwerp. Until recently the city was famous for its iron and coal mining past, but has since transformed into a distinctive and vibrant tourist destination with hidden charm. As evidenced by the futuristic architecture of its railway station, designed by renowned architect Santiago Calatrava, Liège is a place that is changing its image and attracting and a growing number of tourists, many of whom are drawn by the spirit of its most famous son, author Georges Simenon (and his character Commissaire Maigret), which lingers over the city.

Perfect and well equipped for motorhomes, Liège should be explored slowly by leisurely strolling through the streets that stretch from the banks of the River Meuse. This is the best way to appreciate the city’s long and rich history, much of which is preserved in its architecture and artistic attractions. 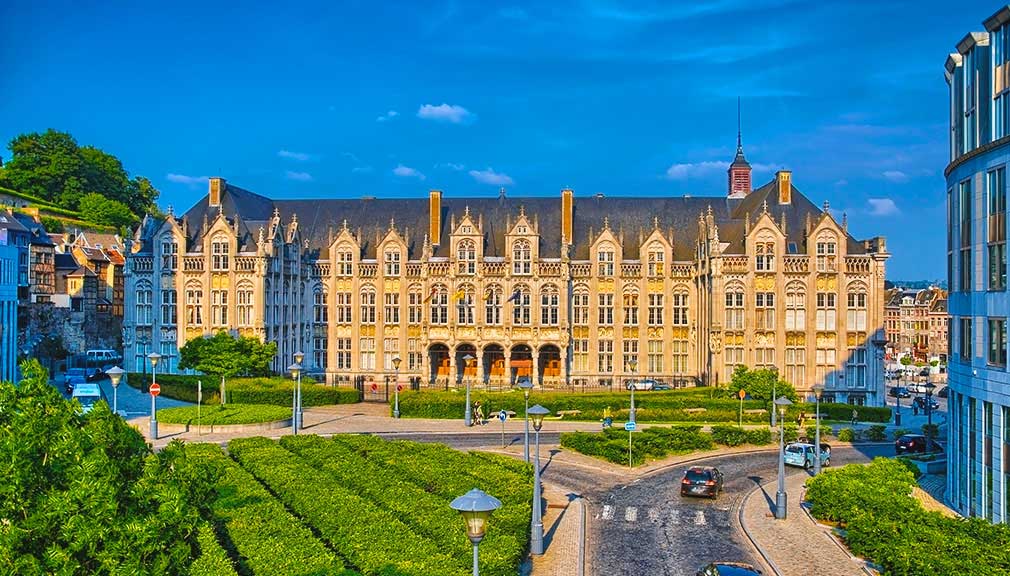 Liège was a capital for almost seven centuries and the magnificent 16th-century Prince-Bishops' Palace is a testament toits magnificence and status as an episcopal diocese. The palace is a large building complex that was begun at the end of the tenth century by Bishop Notger, subsequently enlarged in the 12th century and completely rebuilt between 1526 and 1536 by Arnold van Mulcken, in a style that transitions from flamboyant Gothic to Renaissance architecture. It is well worth a visit.

Lovers of ancient history and Gothic art will find so much to discover: for example, the Cathedral of St Paul is an admirable Gothic building begun in 1232 in primitive Gothic style and finished in 1430 in flamboyant style. St James's Church, another splendid example of flamboyant Gothic architecture, was designed by Arnold van Mulcken and built between 1513 and 1538. Its opulent interior includes ornate star-shaped vaults and is covered in frescoes and ornamental sculptures. In particular, the 16th-century stained glass windows are truly magnificent to behold. The Collegiate Church of St Bartholomew is one of the city’s oldest churches and dates from the Romanesque period. The interior and portal were converted in Baroque style during the 18th century. Travelling through the city, on one side of the river that splits it in half you can see the bustling 19th-century shopping district with its elegant boutiques and pedestrian zone, as well as the Passage Lemonnier. In this covered gallery you can admire and buy crystal and glassware blown by some of Belgium’s leading artisans.

On the other side of the river there are squares and antique markets, half-timbered houses and the older and more working-class quarters of Liège. Of course, no tour would be complete without sampling the excellent local delicacies and traditional beer, which is famous throughout Belgium. Among the speciality foods that are available nowhere else in the country, Boulets à la Liégeoise (Liège-style meatballs) and Carbonade Flamande definitely stand out. The boulets are made from pork and beef and cooked in a special sauce lapin (literally "rabbit sauce"). This has a sweet and sour flavour and contains a secret ingredient, Sirop de Liège, which is a syrup made with cooked pears and apples. Carbonade Flamande is a beef stew in beer, seasoned with different herbs, and is a real treat for the taste buds. Later, in the romantic cafés scattered around the city, you can try the local gaufres liégeoises, which are waffles that come in various shapes and sizes and are cooked with egg yolk, butter and cinnamon. 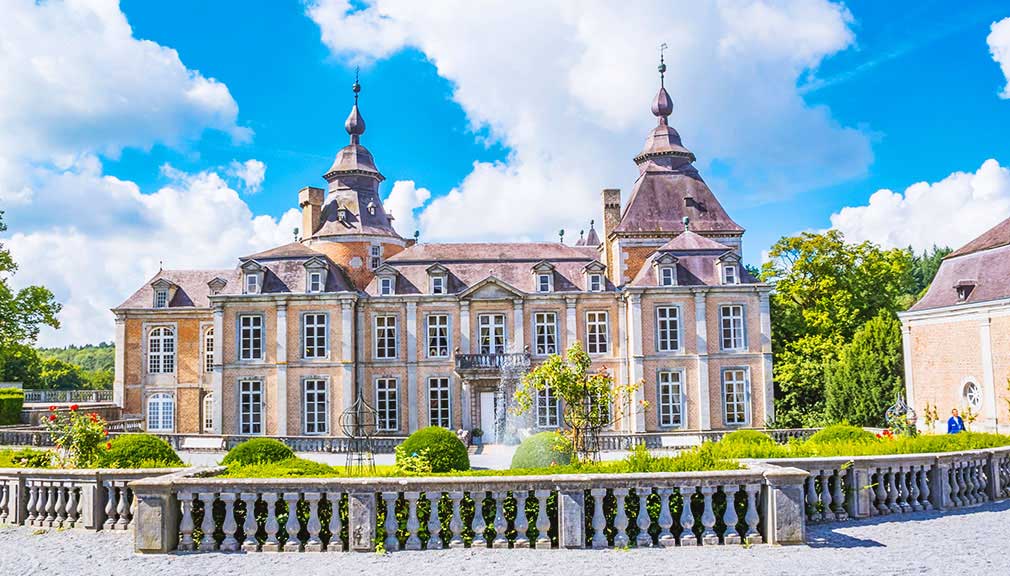 We leave charming Liège behind and resume our motorhome tour of discovery through the rest of Wallonia, a land of romantic, rolling vistas which, due to its strategic position, has been a buffer zone between Latin and Germanic Europe for centuries, assimilating the diverse cultures and developing its own original identity. The remainder of the itinerary visits more closely spaced destinations and passes cultivated fields, gardens and castles.

The first stop, in the province of Liège, is the Château de Modave, a 17th-century stately residence with splendid rooms waiting to be discovered. Built on top of a rocky outcrop, it is now listed as a major heritage site of Wallonia. Twenty of its rooms are open to the public and all are richly furnished and decorated. Here you can admire beautiful ceilings by the stuccoist Jean-Christian Hansche, together with paintings, Brussels tapestries and furniture dating from the 18th century. A tour around the castle park is highly recommended, if only to see the French-style gardens, which were redesigned in the 19th century. The park is free to enter during the castle’s opening hours. 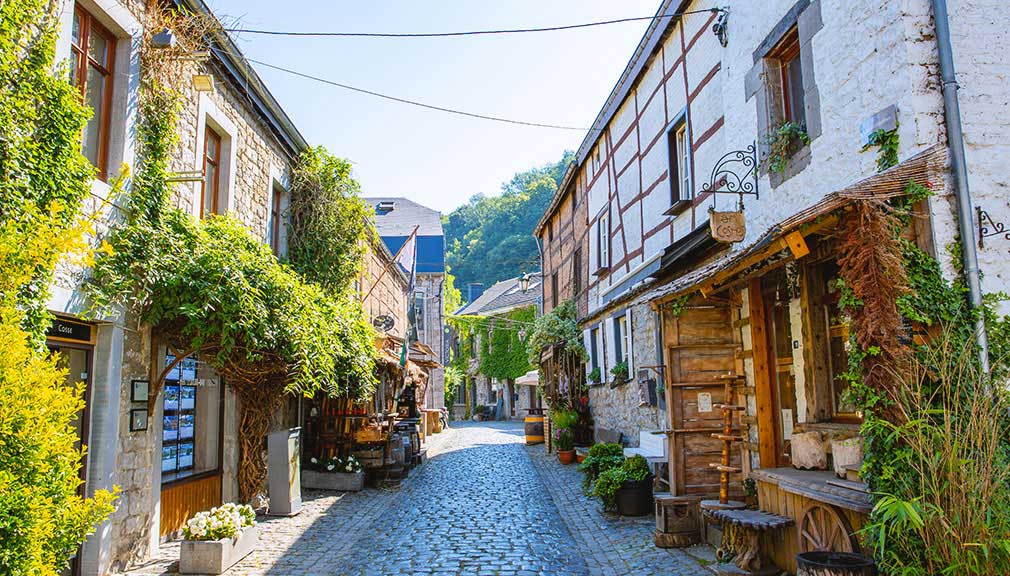 We climb back on board the motorhome and continue on our journey to Durbuy, called "the smallest city in the world". It was founded in medieval times and has preserved almost all of its ancient charm, including cobbled streets, 16th-century buildings, fortifications and a castle. The city is also famous for the Labyrinth of Barvaux and the Parc des Topiaires, which contains over 250 trees sculpted into the most varied shapes. 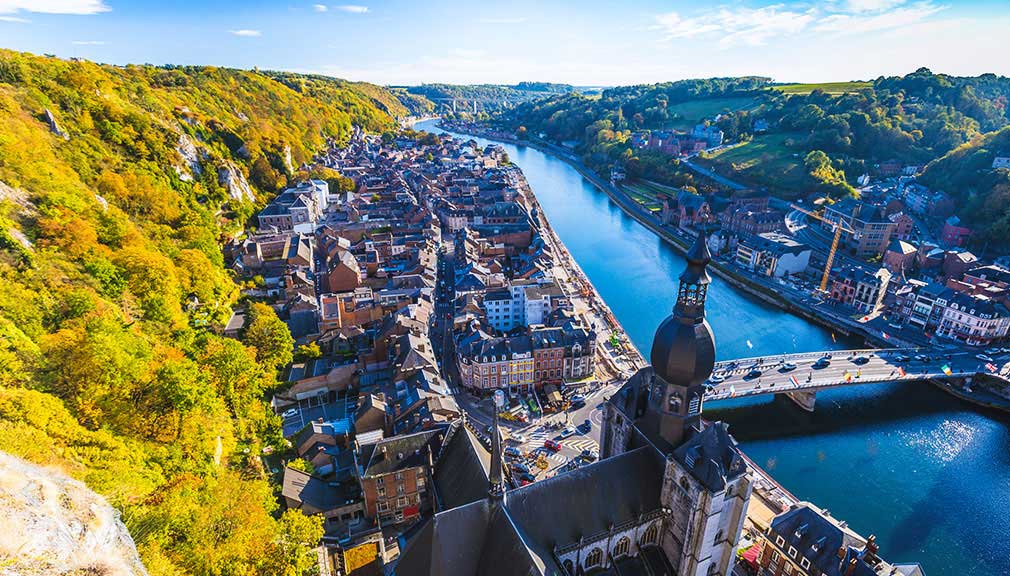 Continuing south we reach Dinant. The town, famous for being the birthplace of Adolphe Sax, who invented the saxophone, is an evocative place with an eye-catching skyline dominated by the bell tower of the collegiate church, as well as the citadel perched high up, traditional dwellings scattered between the Meuse and the cliffs and a romantic cableway that connects the valley to the citadel. There are numerous museums and places to visit here. Alternatively, you can enjoy a pleasant cruise along the River Meuse.

Following the course of the river, we take a small detour that leads us to the Gardens of Annevoie. This delightful park is still irrigated with a hydraulic system designed in the 18th century, which feeds a rich system of waterfalls, water features, fountains, ponds and plant architecture. Here you will find genuine works of art that make this one of the country’s most beautiful water gardens. It is also home to many animals and numerous birds can be spotted, including white swans, herons and even the rare black swan. Opposite the entrance there is an excellent car park, which is ideal for an overnight stopover in the motorhome. 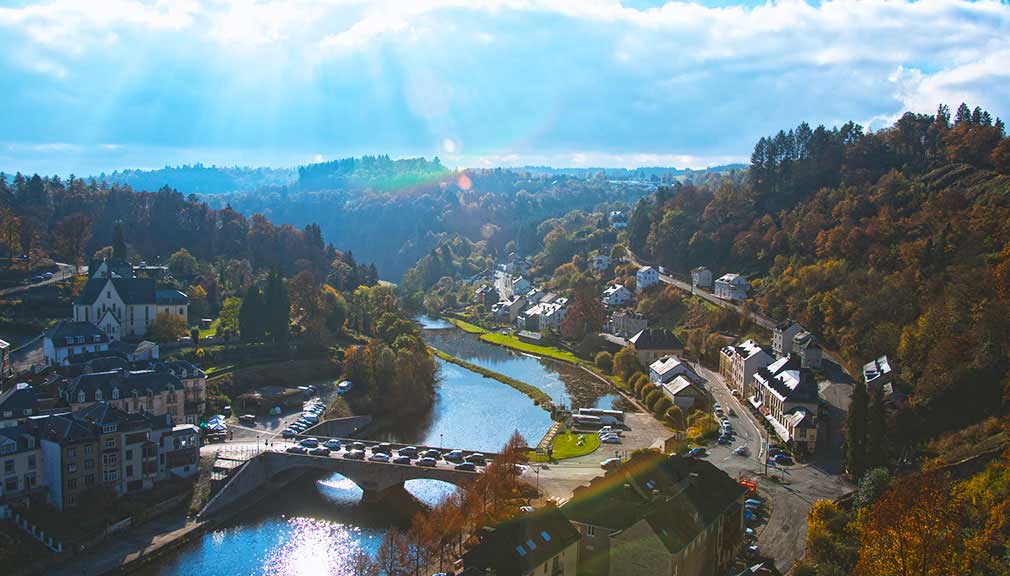 Now let’s take the motorhome onward to Bouillon. Located on the banks of the Semois, this small town is dominated by a historic and grandiose fortress that once belonged to the celebrated Godfrey of Bouillon, one of the leaders of the first crusade, who was also known as the "Baron of the Holy Sepulchre". He was traditionally exalted as a legendary figure, so much so that Dante Alighieri depicted him as a righteous warrior spirit in the Paradise section of his Divine Comedy, while Torquato Tasso made him the protagonist of his epic poem Jerusalem Delivered. The fortress, which Godfrey sold to finance his crusade, is perched on the highest point of the cliff overlooking the river and remains intact, so you can still explore the courtyards, towers and secret passages.

During early August, the castle courtyard hosts a grand medieval festival with plenty to entertain young and old alike. There are also remarkable falconry displays and guided night tours by torchlight. In the countryside around Bouillon, hiking enthusiasts will find beautiful trails following the river’s descent. A little further on, towards Orval, foodies can head to Florenville municipality to taste the exquisite chocolate pralines of one of Belgium’s most famous master chocolatiers, Eduard Bechoux. His workshop is the last stop on the tour and brings our motorhome expedition to a fittingly sweet conclusion.

RETURN TO NEWS NEXT