DISCOVERING HOLLAND: ALL ABOARD FOR A TRIP TO THE WORLD’S MOST BEAUTIFUL TULIPS

A voyage among windmills, tulips and vivid colours to celebrate the arrival of spring. Exploring Lisse, Leiden and other unforgettable places, thanks to our Fiat Ducato-based motorhome.

Springtime is a fascinating and uplifting show everywhere in the world... but there are certain special places where its colours, perfumes and sheer beauty are truly astonishing, thrilling visitors with emotions they will treasure forever in their memories. Let’s visit one of them... Holland! A fascinating journey among tulips, windmills and more.

Let’s start our journey here, a small town with only a few thousand residents but countless flowers! This mediaeval town’s fame and expansion is due to precisely its flowers. It can also boast one remaining tower from the Huys Dever Castle, containing an archaeological museum that displays numerous items retrieved from the moat around the once-great castle. But its fame comes from a different attraction: the breathtaking Keukenhof. This is a botanical park that covers over 32 hectares, where you can admire 800 kinds of different tulips... altogether roughly 7 million bulb flowers! This experience is incredible for any visitor, but even more so for children: like adults they will be stunned by the vast expanse of recently bloomed tulips, hyacinths, orchids and irises, but they can also have fun in a labyrinth and a play centre. The park also contains three pavilions (each offering a surprisingly different floral spectacle), and the ancient castle from which it takes its name. The latter can be visited if you book a guided tour. Nearby you can admire various windmills and the famous watermill called the Lisserpoelmolen, 27 metres high and built in the 17th century. Now let’s get back on the road, taking the N208 until it joins the A44, which we follow until the exit for Leiden/Den Haag. Once we have parked our Fiat Ducato based motorhome, we find ourselves immersed in a timeless atmosphere, between canals and history. Leiden is famous for Holland’s oldest university, which for centuries has been home to a huge Hortus Botanicus... also the oldest in Holland. The botanical garden contains over 10,000 plants, as well as numerous bird species, making it a magical blend of history and nature, especially in the spring. Leiden is also a city rich in art... not surprising, considering that Rembrandt van Rijn was born here! A visit to Leiden offers many delightful experiences, including a rich architectural heritage, especially from the Gothic and Renaissance periods. From Leiden, back to our motorhome and on to Haarlem! 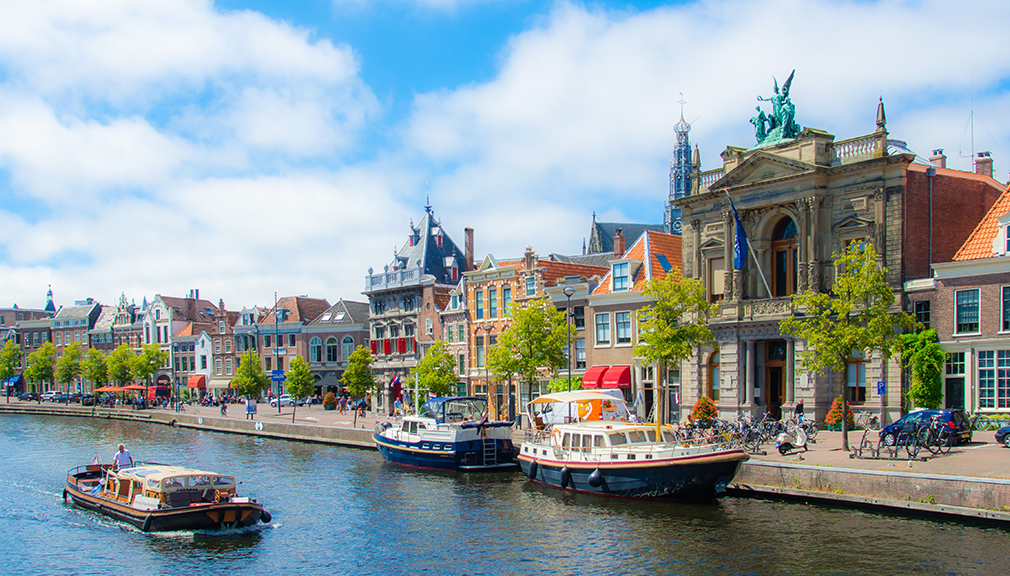 In just an hour’s drive, we’re already admiring its treasures. An enchanting journey through an enchanted landscape brings us to this ancient city, run through by the River Spaarne... the city centre has been exceptionally well preserved, making it one of the highlights of our journey. We start our tour in the centre of the city, in the Grote Mark, the main square, famous for its bustling market. Here we can admire the fine statue of Laurens Jaszoon, considered by the Dutch to have been the inventor of the printing press. The Grote Kerk - or Big Church - contains a deeply esteemed 16th century organ, played by such geniuses as Schubert e Mozart! Strolling through the ancient city centre, don’t miss the Hofijes, with their flower-filled courtyards. Talking of flowers... Haarlem was Holland’s first home for tulips, destined to become the nation’s symbol. Here, in the early 17th century, the first bulbs were imported from Turkey by rich local families, setting off the tulip craze that soon swept the country. When you have explored the city and admired its floating homes and elegant buildings, find time to visit the De Adriaan Windmill and view the city from high up, revealing a fascinating panorama. The windmill is also a kind of museum, and stands on the site where once stood the tower that defended the city in times of siege. In 1932, it was damaged by a fire, but it reopened in 2002, more beautiful than ever, thanks to funding and determination from city residents. On its four floors, you can learn all about its fascinating centuries-old technique for transforming wind into energy. We can now make a decision on whether to drive our Fiat Ducato based motorhome towards the capital of Holland, Amsterdam, a journey of just over an hour, or else return towards our point of departure in Lisse, this time travelling through the southern area of Bollenstreek. The second option is especially recommended for those particularly inspired by nature!

Driving in Holland
When you drive across a border, it’s a good idea to be already informed about the practical aspects of driving in your host country, to avoid irritating surprises. Fortunately, road signs in the Netherlands are very similar to Italy’s, which makes it much easier to move in complete freedom and safety. One difference is that motorway signs are in blue and that travelling on them is entirely free!
USEFUL INFORMATION
Parking and Camping Sites
Here are some parking areas that can be useful to you during your colour-filled trip:
- Lisse - Zuider Leidsevaart (situated 3 km from Lisse and nearby the Keukenhof Park; it offers 40 parking spaces, is asphalted, and is free of charge).
- Leiden Parking Haagweg 6, 2311 AA Tel.: +31715120071 (just outside the city, connected by bus service to the city centre).
- Camperpark N205 Floriadepark 101, 2141 ZZ Vijfhuizen, Noord-Holland Tel.: +31629743111 | Email:info@camperparkn205.nl
In terms of parking and camping sites, the Netherlands offers numerous options... a country tailor-made for those who love adventurous open air holidays. Generally, the costs are very low, which only goes to increase the pleasures of a journey among its beautiful landscapes and canals.