Norway is the land of fjords, glaciers, Vikings and the Northern Lights. But it’s also the land of history, culture, wonderful cities and...Santa Claus! Let’s set off again together on a European trip of discovery that will take us from the capital city Oslo in the south, as far as Lapland, in the far north! A word of warning: mapping out a precise route through the country, which spans about 2,500 km, is complicated if not impossible, also given the difficulty of moving around in the coldest periods. This means that some stopping points might be a long distance apart, but we’re sure that adventurous motorhome owners will plan stops in amazing places, perhaps directly under the Northern Lights! Ready to go? Let’s start up the engine of our Fiat Ducato-based motorhome and belt up: off we go!

Oslo, between metropolises and natural parks 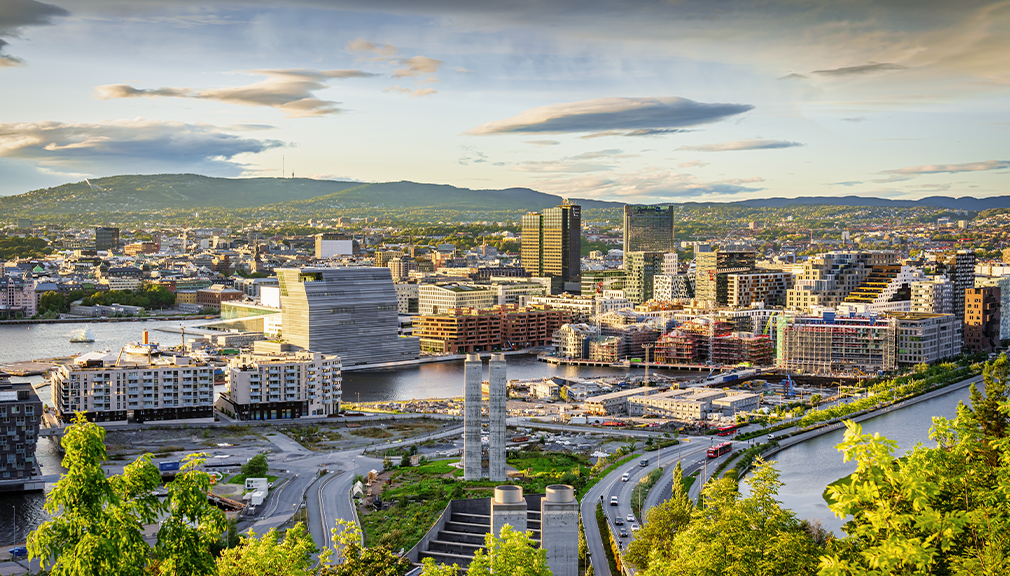 Few cities in the world can offer such a mixture of metropolises and nature as Oslo, where cutting edge attractions, museums and art galleries sit alongside a multitude of parks, gardens and real nature reserves.

Of the many things on offer to see and do, Akershus Fortress is top of the list: since the 13th century it has towered above the Oslo Fjord, firstly as a castle, then as a Renaissance palace and now as a military installation, even if open-air theatre performances and concerts are often hosted in the nearby park.

Another unmissable appointment in the capital is undoubtedly the Viking Ship Museum.
A unique experience almost impossible to find anywhere else, in a place where Viking ships built more than a thousand years ago stand tall and proud, thrilling visitors as they convey the greatness of their people. The most solemn of them all, the Oseberg, had space inside for no less than 30 rowers and today we can still admire the decorations on her stern and bow, statues of snakes and dragons designed to instil fear into the enemies who dared try to challenge her.

The last must-stop visit before we set off again on board our Fiat Ducato-based motorhome, is the Norwegian Folk Museum, the largest open-air museum in the country. Here we can admire more than 150 buildings, all from different regions of Norway and dating back to the 12th and 13th centuries. Ancient shops, carriages, popular music and dances crown an almost fairytale-like mood, that will sweep us off our feet and take us back to our childhood! 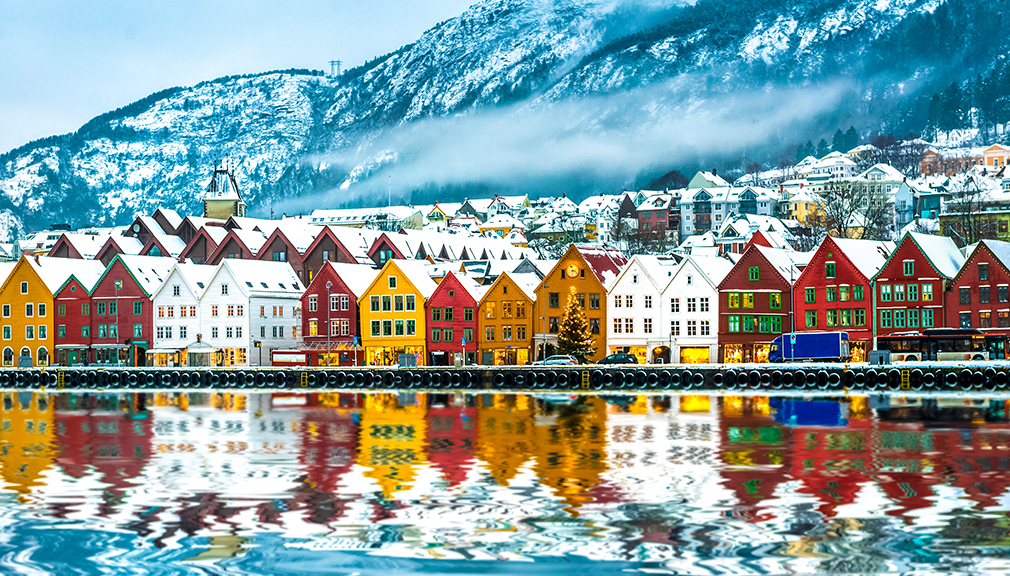 Heading westwards on board our four-wheeled friend, after a journey of about 450 kilometres (but with many villages we can stop or even spend the night in if we’re not in a hurry), we arrive in the city of Bergen. Full of the characteristic local colours and architectures, with houses in vibrant shades topped by gable roofs, it is surrounded on one side by an infinite natural landscape, with forests reaching as far as the eye can see, and on the other by the stupendous fjords.
There, we can easily take one of the tourist ferries that tour the waters of the Fjords! Want a tip? Sprint to the seats in the front row of the boat if you can: you won’t regret it!
Instead, if we want to admire the view from above, we can go up Mount Ulriken, which offers an all-round panorama of the landscape, a panoramic terrace and restaurant services too, making it an essential stop, even only for spending a pleasant afternoon with a view. To reach Mount Ulriken we could use one of the many buses that leave from the city centre, if we’re reluctant to move our Fiat Ducato-based motorhome. Otherwise, for the more adventurous among us, there are also many trekking paths!

Trondheim, the city of the King 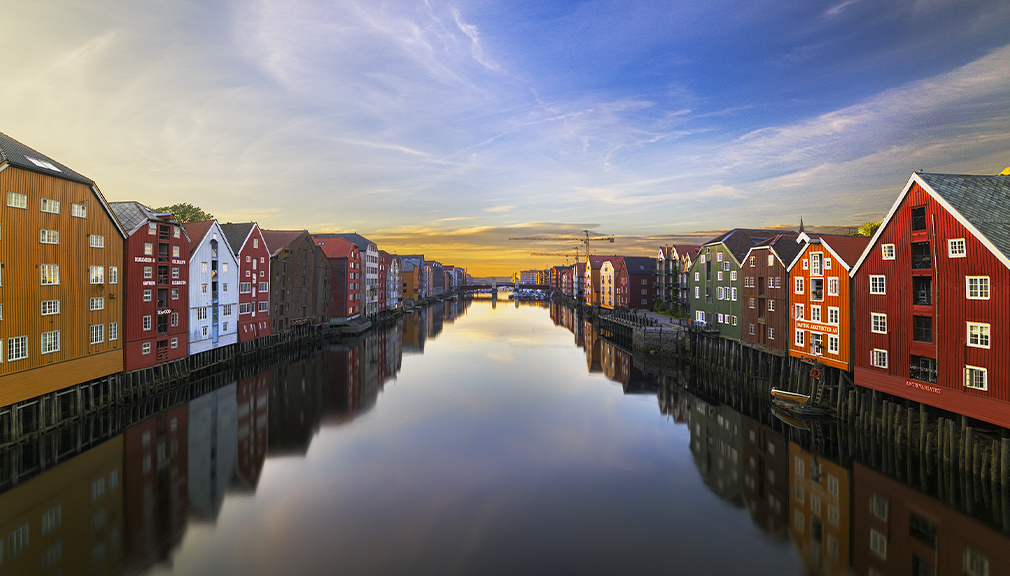 Having travelled many kilometres through breathtaking landscape, we reach Trondheim, the city founded in 997 by King Olaf I, and capital city of Norway for about 200 years. Built on the longest fjord in the country, which spans an impressive 130 km, here we can admire the beauties of the location and also get ready for the trip further north, where the climate is even colder, but the landscape is even more captivating.
Trondheim has its fair share of museums, including the Art Museum, with more than 4,000 Norwegian works, the National Museum of Decorative Arts in Nordenfjeld, with exhibits including furniture, ceramics, textiles and many other historical objects, dating from the 15th century to the current day, and the Rockheim, the national museum for popular music.

The historical monuments here will also take our breath away: from the Archbishop's Palace, where jewels of the Norwegian monarchy are still preserved, to the Stiftsgården, royal residence and the largest wooden building in the north of Europe!

Trondheim also has lots to offer for those seeking fun and entertainment, thanks to its many university campuses that create a young, vibrant atmosphere, packed with cultural events.

Tromsø, the town of the Northern Lights 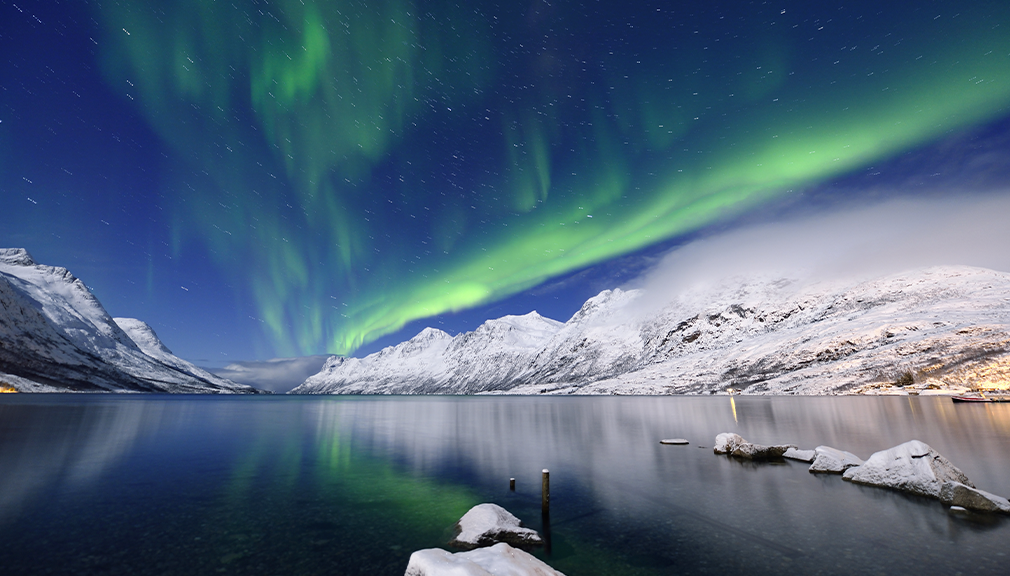 After some well-deserved rest, we jump back on board our four-wheeled friend and head even further north, towards the ice hotel, the Northern lights and a unique natural landscape.
We reach the island of Tromsø, but don’t worry: this little island is actually connected to the mainland by three bridges, so we can easily get there on our Fiat Ducato-based motorhome!

Exploring this place and all its surroundings properly would take days, if not weeks, among wonderful fjords, icy cold plains, reindeer and dog sleds!

One place you can’t afford to miss is the Ishavskatedralen, the “Arctic Cathedral” built in 1965 which, with its 2940-pipe organ, large mosaic window and eleven characteristic triangular “arches”, has truly become one of the symbols of the town.

Another unique attraction is the Polarmuseet, the Polar Museum that relates the history of the expeditions to the North Pole over the years, with historical artefacts, old photographs and utensils from over 100 years ago. Another museum that may be of interest to many motorhome owners is, in fact a ship! The Polstjerna (Polar Star), today kept inside a glass building to shelter it from the weather, is an original mid-20th century ship that has been perfectly preserved and is open to visitors, even inside.

And now, it’s finally time to see what we’ve all really been waiting for. Santa’s house? No: the Northern Lights! Yes, Tromsø is the ideal location from which to clearly view this unrivalled natural phenomenon. The best time to see them is between mid-September and March, although, with a bit of luck, and if you know where to go, you can also admire it in the other months of the year too! However, we recommend relying on the experience of the local guides, who organise dedicated night-time excursions. The environment is very hostile, so adventuring off the beaten track alone could be risky, even for seasoned adventurers like us!

Wait a minute, Santa’s house...is in the south?

Yes it is! Although we are all used to imagining him living as far north as possible, one version of the story tells of him living in the town of Drobak, near Oslo, but only from January to November! Indeed, legend has it that Santa Claus hides among ordinary people, living his life incognito for many months of the year until, when the time is right, he hops on board his flying sleigh, ready to bring magic to all the children around the world... the same kind of magic we all feel every time we climb on board our beloved Fiat Ducato-based motorhome, and not just at Christmas!

We’ve come to the end of this short guide that has taken us on a journey of discovery through many wonderful places, in a weave of history, fun and boundless nature. Where will our next adventure take us? We’ll find out soon. But for now, Merry Christmas everyone!​