The sea, islands, history and some of the most beautiful sunsets in Europe: Greece is waiting to be discovered and enchant even the most sceptical traveller with ancient temples and glimpses of the future!
So let's climb into our Fiat Ducato-based motorhome and explore a country that was once home to the founding culture of Western civilisation.

The North and its monasteries If you want to enter Greece by land, you will have to arrive from the north of the country, far from the sea. But don’t despair, there are still lots of breathtaking landscapes to get lost in as you travel south and begin to immerse yourself in a surreal mix of unsullied natural beauty and priceless cultural heritage.

The latter includes the famous Meteora, on the north-western edge of the plain of Thessaly, where a complex of 24 monasteries (of which only six are still intact and functioning) is built on huge natural rock towers, offering not only a spectacular panorama of the area, but also some of the most iconic landmarks in all of Greece. These monasteries were built to defend hermit monks against Turkish invasions during the 14th century and, thanks to their strategic position, were considered practically impregnable. The largest is called Great Meteoron and stands over the plain at an altitude of 534 metres.

But now let’s continue south towards the capital Athens, with a brief stopover in the city of Lamia, which allows us to split a long journey in half and explore a settlement that dates back to 5th century BC. History buffs will also enjoy the nearby destination of Thermopylae, where Leonidas and his 300 Spartans faced a Persian army under Xerxes.

Delphi, Athens and its wonders 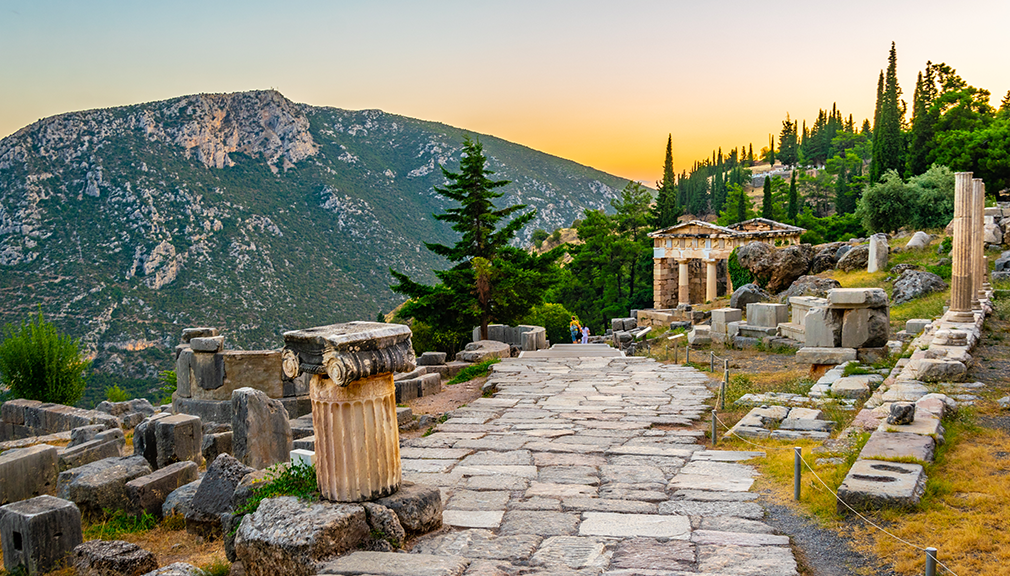 Before we reach Athens, it’s worth making a detour to Delphi, the site of a major temple dedicated to Apollo and home to the most famous of the oracles, who were divine authorities in ancient times. This place was considered to be the centre of the world by the ancient Greeks!

It is impossible to think of Greece without recalling the capital, Athens, a timeless city that manages to offer tourists every activity under the sun: from visits to countless archaeological sites, to gastronomic tours with local food and wine tasting.

Leaving our motorhome just outside the city centre in one of the many motorhome parking areas, we can quickly reach the most crowded areas by public transport, which is in plentiful supply.
Once in the centre, it is advisable to purchase a pass that will allow you entry to all of the area’s most unique destinations, from the majestic Parthenon to the countless temples and colonnades in the Acropolis (not forgetting the Propylaea at its entrance), a UNESCO World Heritage site and symbol of Greece’s ancient culture and historic might.

The Agora, like the Acropolis, is a must-see for visitors to Athens. This was once the commercial, political and administrative heart of Greece, making it one of the most symbolic and culturally significant places not only in the country, but also throughout Europe.

However, if you want to get lost in the streets of Athens, spending several hours browsing its unique shops and attractions, you really must visit the Plaka, a neighbourhood inhabited continuously for over 7000 years and largely unaltered during that time, a place of enchanting beauty in every season.

Corinth and the Peloponnese 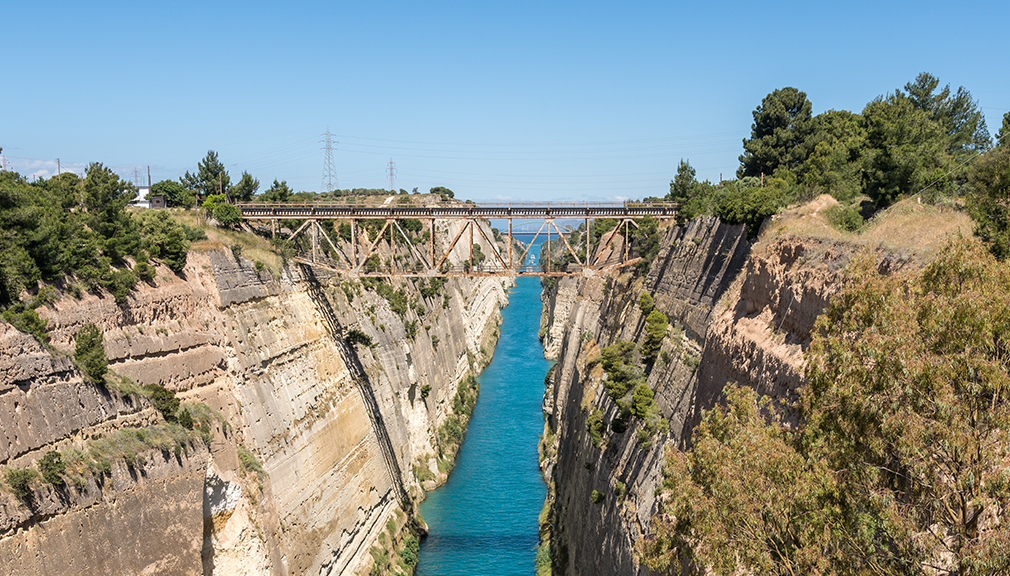 Returning aboard our Fiat Ducato, we head west to Corinth, a major trading point in antiquity, as well as a gateway to the Peloponnese. It is one of the most culturally important geographical areas in the world and, in addition to Corinth, was also the location of Sparta and Tripoli, three of the ancient world's most influential city-states.

While in Corinth we simply must visit Acrocorinth Castle, with its 3000-metre long perimeter walls, which controlled the mainland access to the entire Peloponnese.

We continue our journey on board our Fiat Ducato by heading to Sparta, another unmissable destination for those with a passion for ancient civilisations, where we can visit places we have read so much about throughout our lives and in school books. Here too we find an Acropolis, with various buildings of great architectural and historic value such as the sanctuary of Gaia, the temple of Athena Chalkioikos and the basilica of San Nikon.

The bronze statue of Leonidas was built more recently, to commemorate the Spartan king’s famous sacrifice at Thermopylae.

The islands and the sea 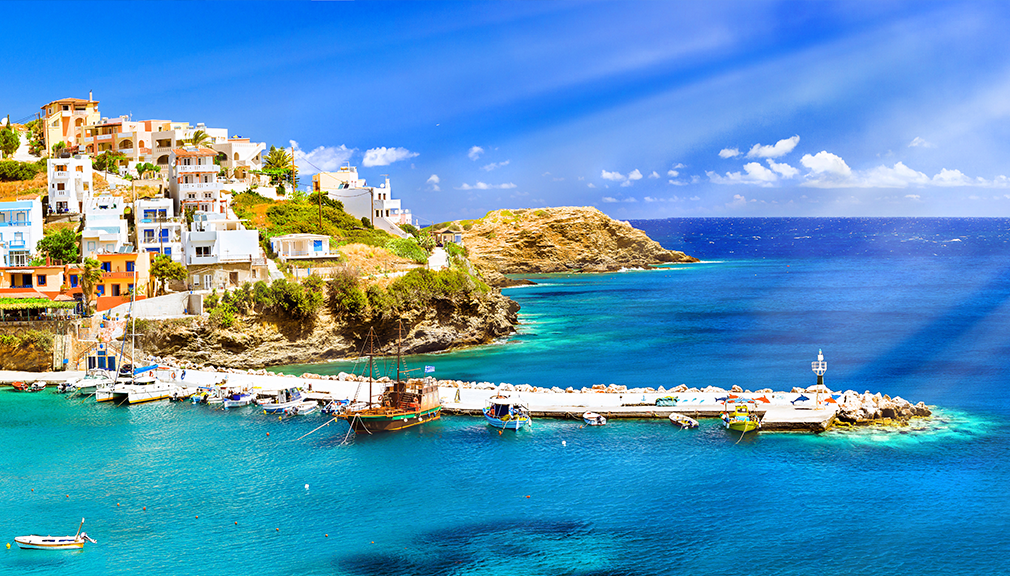 Our tour of the Greek mainland in our Fiat Ducato has finished and it's time to board one of the many ferries that will take us on a discovery of the islands south of the country, where we can finally enjoy a bit of relaxation by the sea.

Only 227 of Greece’s 6000 islands and islets are inhabited, and all are worth a visit.

For those seeking entertainment during the evening or daytime, we recommend visiting Mykonos, which according to mythology was formed from the petrified bodies of giants killed during their battle against the Olympian gods, known as the Gigantomachy; the island offers enjoyment for all tastes, from sport to culture!

The largest of the Greek islands is Crete to the south of the country, once a flourishing maritime empire from which all the seafaring routes of the Mediterranean were controlled. It offers ancient relics such as Knossos and the Palace of Minos, home of the famous king Minos, an important character in Greek mythology who owned the eponymous labyrinth guarded by the Minotaur.

Thanks to its large size, Crete is a favourite destination for motorhome owners like us who want to tour the world aboard our trusty Fiat Ducato-based motorhome!

We have come to the end of this short guide to Greece, another unmissable destination on every self-respecting traveller’s wishlist! With its mythology and breathtaking landscapes, this beautiful land awaits everyone who can’t wait to embark on another adventure in their Fiat Ducato motorhome.