GERMANY BY CAMPERVAN IS A TREASURE TO BE DISCOVERED!

A journey to unmissable German cities: cross the Bavarian Alps in your Fiat Ducato-based campervan with us!
Spring holidays on the horizon, but you haven’t yet decided where to go? Fasten your seat belts, and come with us to discover some Bavarian gems! 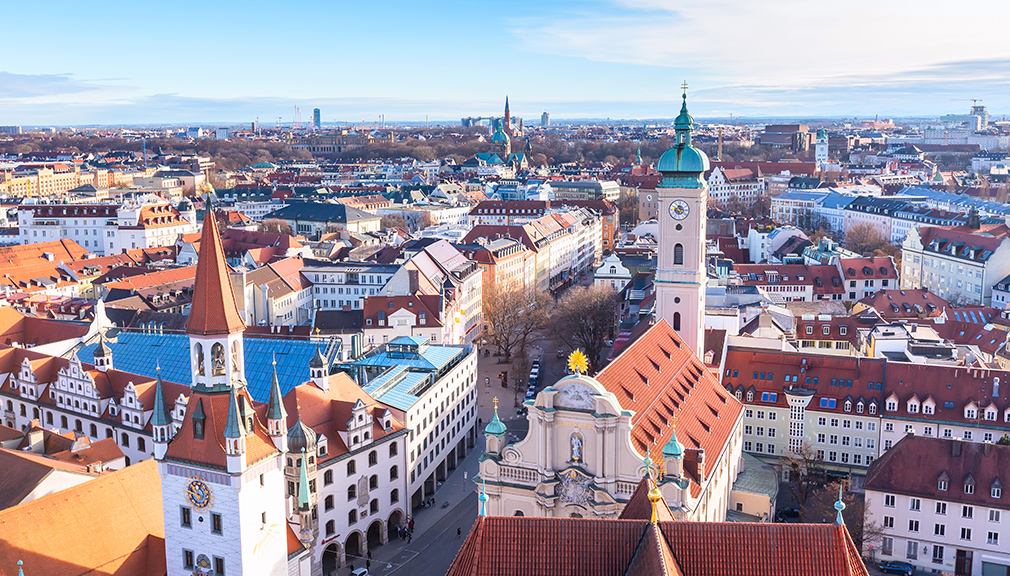 First stop: Munich! This city, world-famous for its Oktoberfest, is a perfect Teutonic blend of history, modernity and pleasure.
Once you have parked your Ducato motorhome, take a wander in the Altstadt (the old city). Start from Marienplatz, heart of the historic centre housing the Town Hall tower and the Glockenspiel: the largest carillon in Germany, fourth largest in the world. Every day, 32 statues and 43 bells stage some of the most important events in the history of Bavaria! The old city centre, closed to traffic, will invite you to lose yourself between monuments and museums, but also between flavours and world-famous places.
For example, you can visit the Hofbräuhau, the oldest brewery in Munich, famous as a meeting place for political meetings in the early 1900s.
If you wish, before getting back on board your Fiat Ducato-based campervan, you can stop off at the Hofgarten, the Court Garden, built between 1613 and 1617 in the style of an Italian Renaissance garden. An oasis of peace in the city! 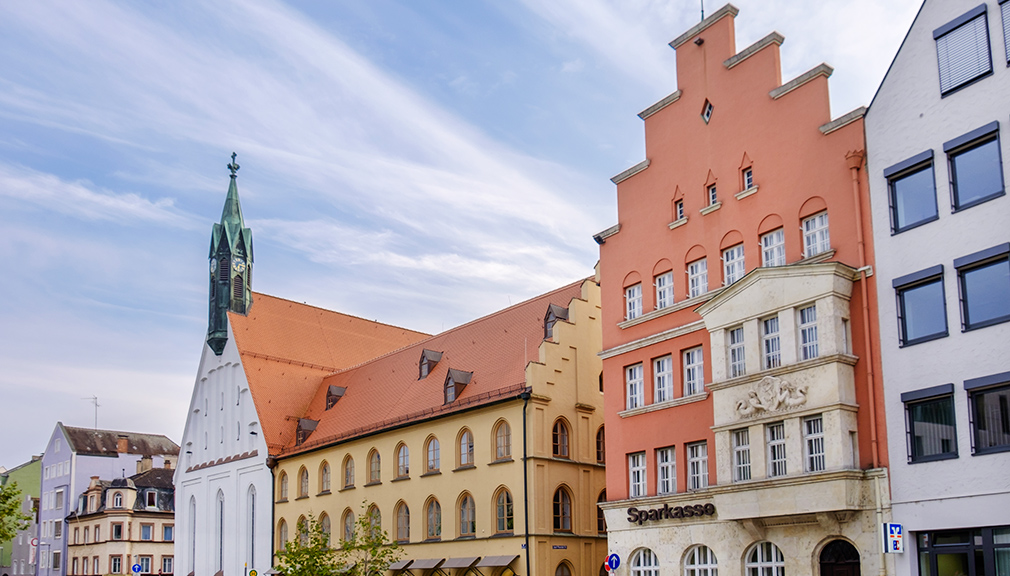 As we set off again, we take the A9 as far as exit 62. It will take only an hour in our Fiat Ducato campervan to arrive at Ingolstadt, a university city (site of the first State University of Bavaria, dating back to 1472) but also a perfect place for a full immersion shopping trip. To reach the historic centre we can enter through the Kreutzor gate, one of the city’s four main entrances until the 19th century. Built in 1363, it stands out for its red bricks and its fairy-tale architecture The city is small but hides some pearls that are well worth seeing.
An example? The baroque church Asamkirche Maria de Victoria, which boasts the largest painted trompe-l'œil ceiling in the world. It was painted in 1735, in just six weeks of work!
A good look at that should give you the appetite to stop in a down-town restaurant to try some Weisswurst, Knödel and other typical dishes.
Full up? A little rest, and then we can go back to our campervan on its Fiat Ducato base. 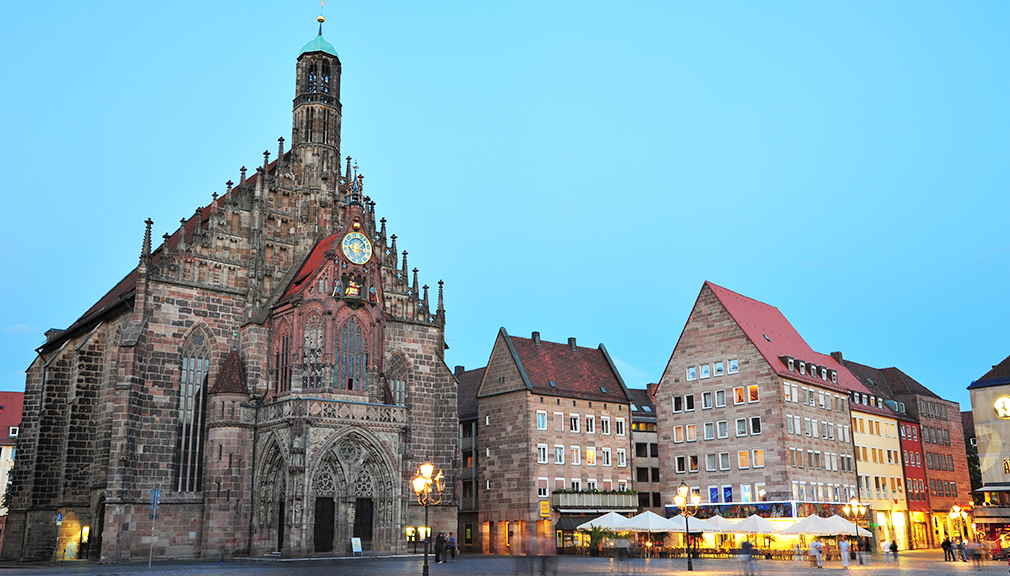 We take the A9 again, drive about 100 km, and find ourselves in Nuremberg. This is the main economic and cultural centre of Franconia, the northernmost part of Bavaria.
The city walls extend for about 5 km and one of the most famous places is the Hauptmarkt. Every year, in December, this marketplace fills with lights, scents and the magic of Christkindlesmarkt, the most famous Christmas market in Germany.
If you are travelling with children you can't miss it Spielzeugmuseum (Karlstraße 13-15, closed on Mondays): a palace of toys from every age! Inside you can find 18th century dolls in wood or porcelain but also Lego, Playmobil, electric trains and the most modern games as well. 1,400 square metres of pure happiness... for all ages.
Another highly recommended stop: the Burg, the huge fortress built in 1039 as a castle for the Holy Roman Emperor, later becoming a full-scale military citadel. The buildings are all the more spectacular for their position: from the observation floor of the Sinwell tower, at a height of 385 metres, you can enjoy a breathtaking view of the entire city of Nuremberg.
As we look towards the horizon, how about a thought for our motorhome’s next stop? 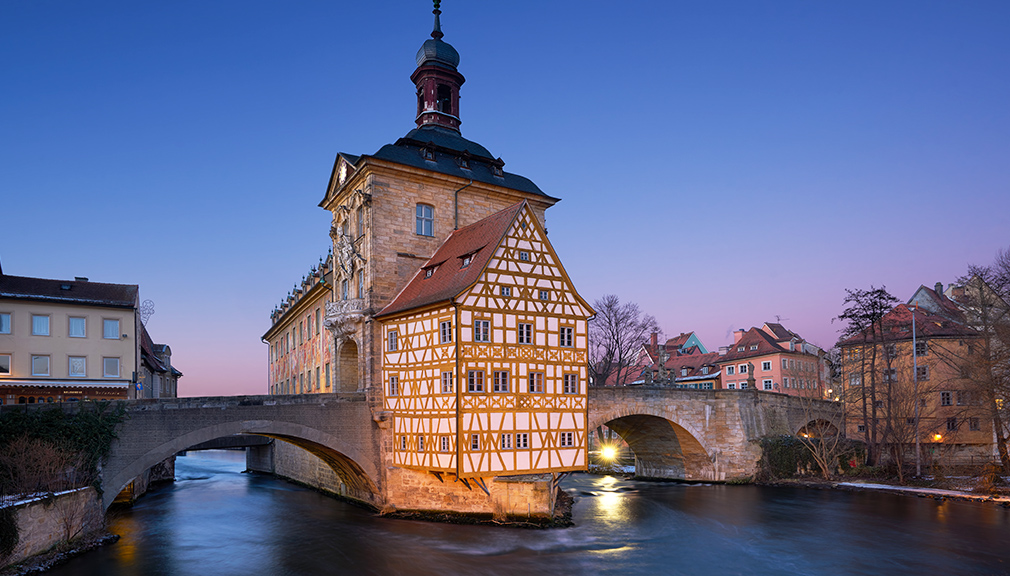 Off we go again! Now we take the A73 in the direction of the B22, until the Bamberg exit. For the last leg of our Ducato campervan journey, a historic city centre protected by UNESCO, with a rich millennial history, is just what the doctor ordered!
You’ll be spellbound by the historical Bavarian architecture of this town, spread along the banks of the Regnitz river (that boasts of 80 bridges!). Two examples? Firstly the great Cathedral, dominating the historic city centre, full of masterpieces of Gothic sculpture. And secondly the Altes Rathaus, the Old Town Hall, perched bizarrely in the middle of the river.
But if you’re a beer lover, you may be more attracted by the Beer Museum, where you can discover Bamberg’s traditional smoked beer: Rauchbier.
And celebrate your journey in a frothy way!

Driving in Germany
In Germany you drive on the right, as in Italy. Distances are also indicated in Km, so speed limits indicated on road signs will be easily understood and... respected!
The speed limits are
- 50 km/h for urban roads
- 100 km/h for the main extra-urban roads
- 130 km/h for motorways.
USEFUL INFORMATION
Parking and Camping Sites
Between one stage and another of your journey, here are some places to take a break and relax:
- Oktoberfest Camping, (De-Gasperi-Bogen, 81829 München) 800 places available with electrical connection. Plus a restaurant and a supermarket on site. Contacts: info@oktoberfest-camping.com +49 (0) 176 30 45 40 00
- Wohnmobilstellplatz "Am Hallenbad" (Jahnstrasse, 85049 Ingolstadt, Bayern) Contacts: info@ingolstadt-tourismus.de +498413053035
- Volkspark Marienberg (Kilianstrasse 200, 90411 Norimberga) The parking area is free, and practical for reaching the centre by bus or bicycle. Contacts: tourismus@nuernberg.de +4991123360
- Camping Insel Bamberg (Am Campingpl. 1, 96049 Bamberg) situated on the river bank, with shaded areas. Contacts: +49 951 56320