A ROAD TRIP OF DISCOVERY AMONG THE DOLOMITES

Whether you have just returned from holiday or are yet to organise your next adventure, don't worry, we will help inspire you for the next trip!

What better way to escape the hottest days of this year’s long summer than planning a wonderful road trip aboard your Ducato-based motorhome to discover the fantastic landscapes of the Dolomites?

Let’s set off there now!

Whether you have just returned from holiday or are yet to organise your next adventure, don't worry, we will help inspire you for the next trip!

What better way to escape the hottest days of this year’s long summer than planning a wonderful road trip aboard your Ducato-based motorhome to discover the fantastic landscapes of the Dolomites?

Let’s set off there now!

The Dolomites are one of the few remaining places in the world that can boast of still having an almost completely uncontaminated natural environment. They extend over a vast territory that spans several regions of north-eastern Italy: Veneto, Trentino-Alto Adige and Friuli-Venezia Giulia. In 2009 they were declared a World Natural Heritage Area by UNESCO for their unique topography and diversity of colours.

Did you know? The Dolomites were formed about 250 million years ago. The characteristic carbonate rock of which they are composed is actually an accumulation of shells and corals sedimented on an ancient seabed, very similar to the ocean floors covered in coral reefs that we see today. This sediment was eventually compacted and deformed into mountains by the collision of the African and European tectonic plates.

Given the vastness of this territory, there are many places worth a visit. We have recommended some of our favourites below. 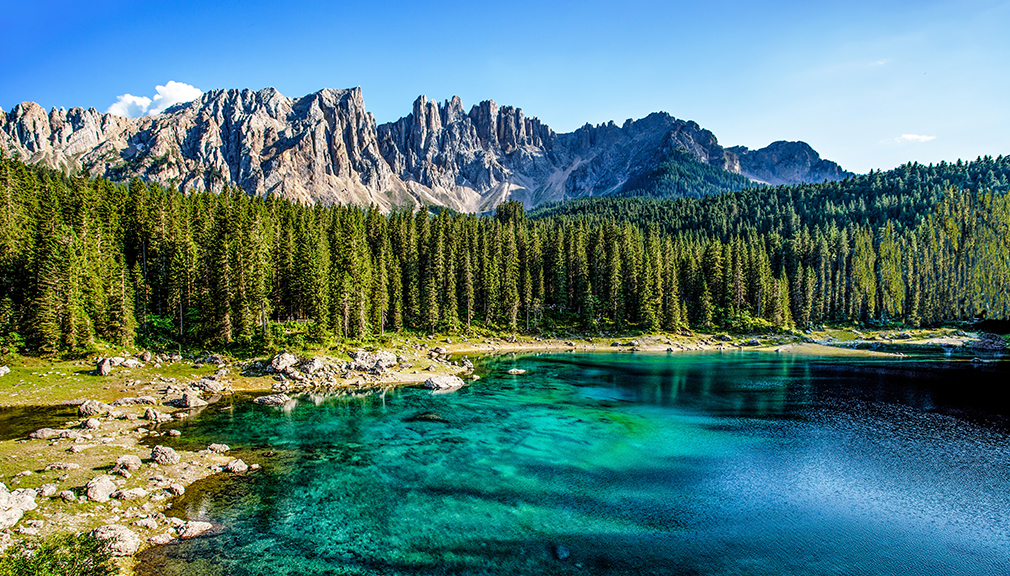 To set off with a clear head, we recommend that you start your Dolomites tour from the small, fairy-tale lake of Carezza. Why fairy-tale? Because according to the season and time of day, the lake shimmers with all the colours of the rainbow due to light refracted on the surface. Hence, this place is also called Rainbow Lake, or Lec de Ergobando in the local Ladin language. A walk around its banks won’t take more than an hour, but you will be blown away by its legend and beauty! 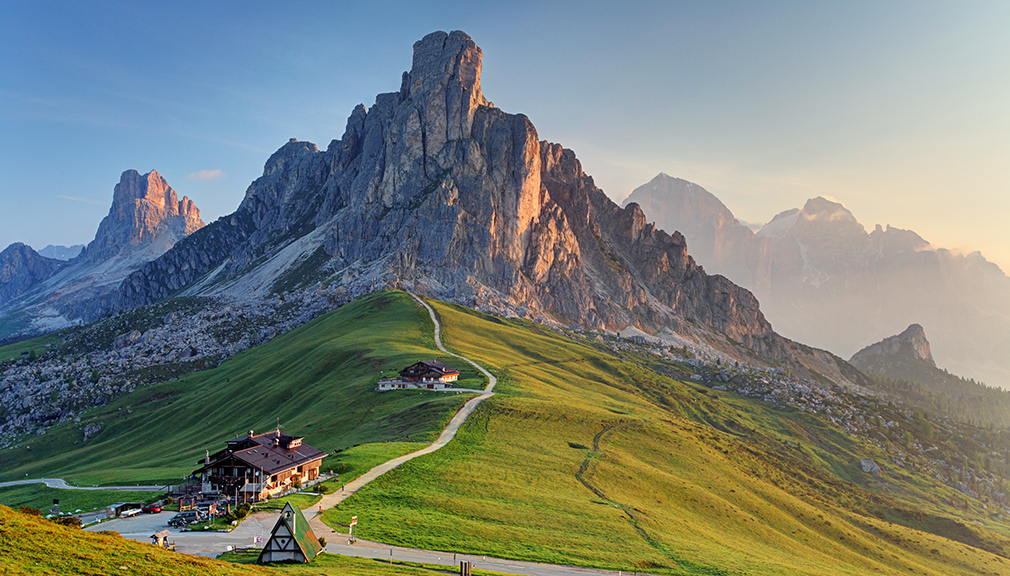 If you love cycling, you simply must enjoy a ride through one of the most fascinating places in the Dolomites: the Giau Pass. The ascent to this pass is often included as a stage route in the Giro d'Italia. Relax among the trails that will take you to panoramic refuges and lose yourself in the distinctive Dolomite landscape. 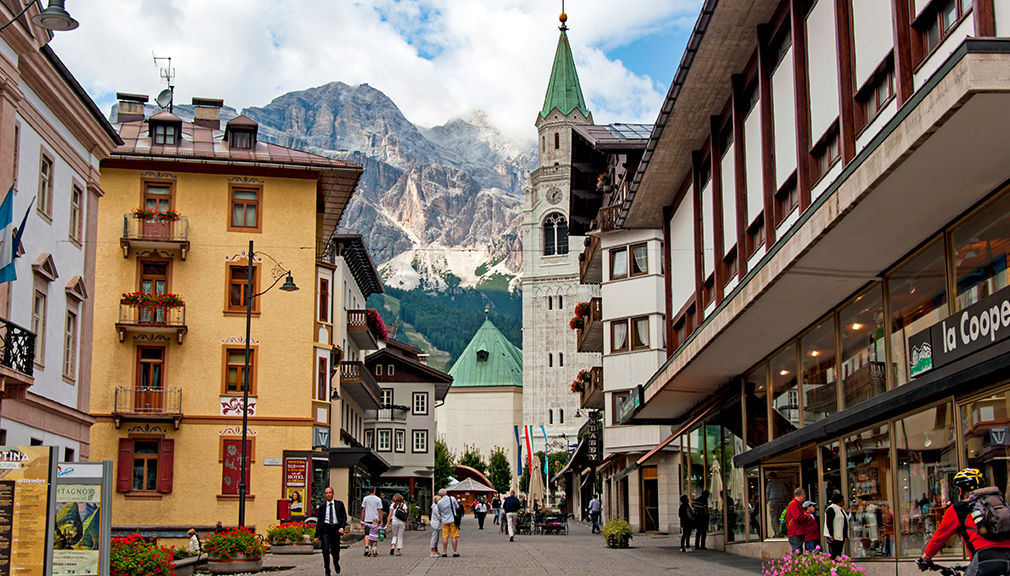 Also known as the Queen of the Dolomites, Cortina d’Ampezzo is an essential stopover on any tour of these areas. Known for winter sports, in summer it is an excellent starting point for various excursions and walks, such as the trail leading to the waterfalls in Fanes Gorge, or the path leading to the ancient Castello de Zanna fortress. 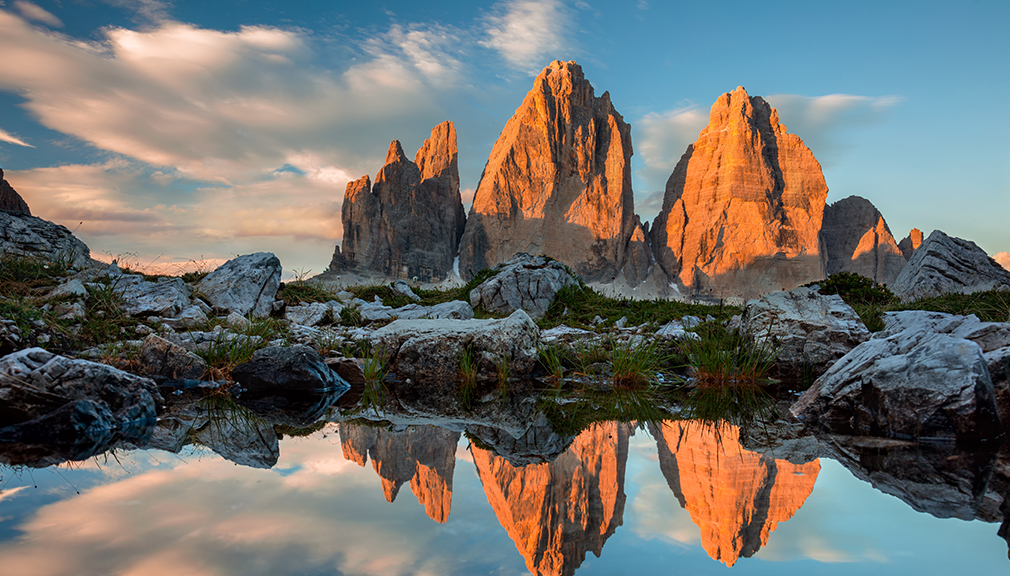 From Cortina d'Ampezzo, head north towards one of the most famous and unique places in all the Dolomites: Tre Cime di Lavaredo.

Before reaching the three peaks, we recommend stopping by at Lake Sorapis, which is located halfway between Cortina and Lake Misurina. Also known as “the turquoise lake” for the colour of its shimmering, crystal-clear water, the lake is situated 1923 meters above sea level and can only be reached via a picturesque hiking trail. We guarantee you won't be able to resist taking at least one photo along the way!

Continuing further north you will come to Lake Misurina, the largest lake in the Dolomites, also known for its therapeutic properties owing to the particularly healthy microclimate. Interestingly, in winter it hosts a horseback polo tournament thanks to the thick ice beneath its snow-covered surface. From here there are several paths leading to Tre Cime di Lavaredo.

The peaks can be reached from both the Veneto and Alto Adige sides. For an easier excursion, park your Ducato-based motorhome at the Auronzo Refuge and then continue on foot; experienced trekkers can instead try a more challenging route starting from Val Fiscalina. The circular walk around the three peaks takes about four hours, but we advise you to take it easy and immerse yourself in the majestic scenery. If you want some splendorous views, we recommend you visit the peaks at dawn or admire them at dusk to fully enjoy the Enrosadira, the spectacular phenomenon whereby the Dolomite mountains gradually take on a reddish colour.

If you love lakeside settings, we recommend that you also read about some of our other recommended destinations here. 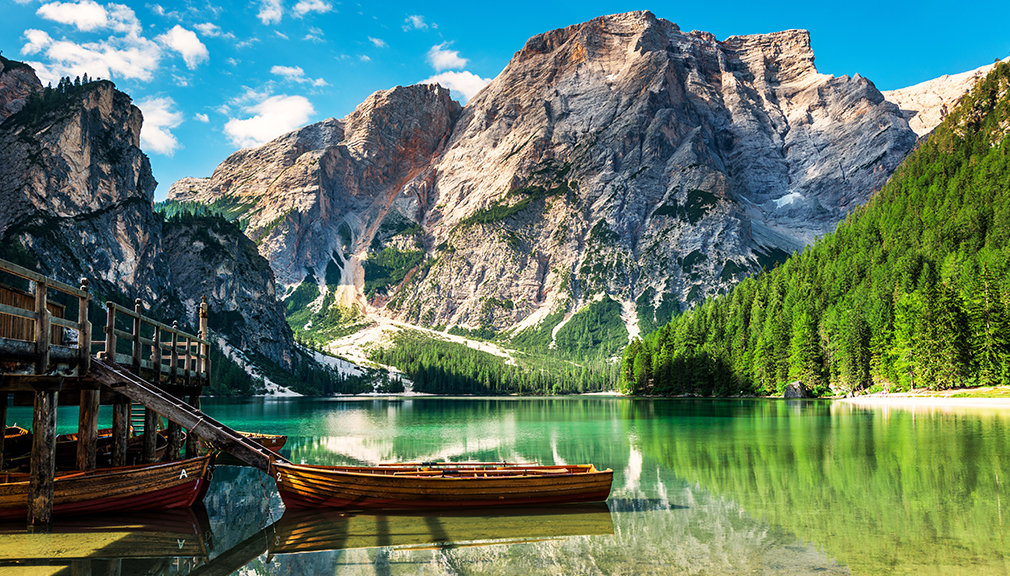 From gargantuan peaks to one of the most photographed and visited places in the Dolomites: Lake Braies. The lake is located within the Fanes-Senes-Braies Nature Park, at the foot of the Croda del Becco wall. No doubt you have already come across a photo of this magnificent green lake populated with small wooden boats! The pearlescent shades of its waters, from emerald green to intense blue, will take your breath away!

Are you ready to breathe in some fresh air, immersed in majestic and uncontaminated nature?

Happy travels aboard your Ducato-based motorhome!